How Do I Save, Reuse and Remove a WCFG File?

This answer record describes steps we can follow to Save, Reuse and Remove a Waveform Configuration (WCFG) file with Vivado-Simulator.

GUI Mode: With the waveform window open, Select File > Save Waveform Configuration As and supply a file name to save a WCFG file. 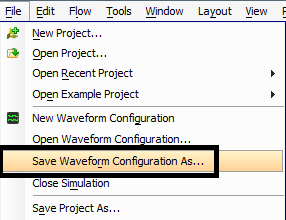 Once you do that, it would prompt to save the Waveform Configuration file in the project. Click on Yes and it would save your WCFG to the project also as well on your disk. 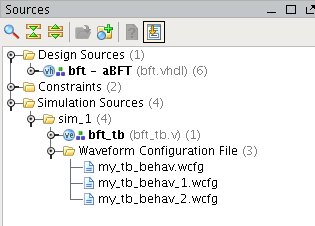 If you run simulation, these three WCFG files would be open together and you can View them.

TCL command: You can use the property xsim.view to point to the .wcfg's which you want to view after launch simulation.

The following example opens the three WCFG files listed below after launch_simulation.

GUI Mode: Select the .wcfg file you would like to remove from the Waveform Configuration File list in the Sources view under Simulation Sources. Right-click and select Remove file from the project

Note: There is a known issue with 2015.1 Vivado where in it would still display the removed WCFG once you launch simulation. This issue would be resolved in the future version of tool.

Run the TCL command below and put only the .wcfg files which you want to view after simulation is launched

In this command we have removed /home/debrajr/project_1/my_tb_behav.wcfg, so when you launch simulation, it would not display that .wcg anymore.